How To File For A Florida Divorce Without An Attorney 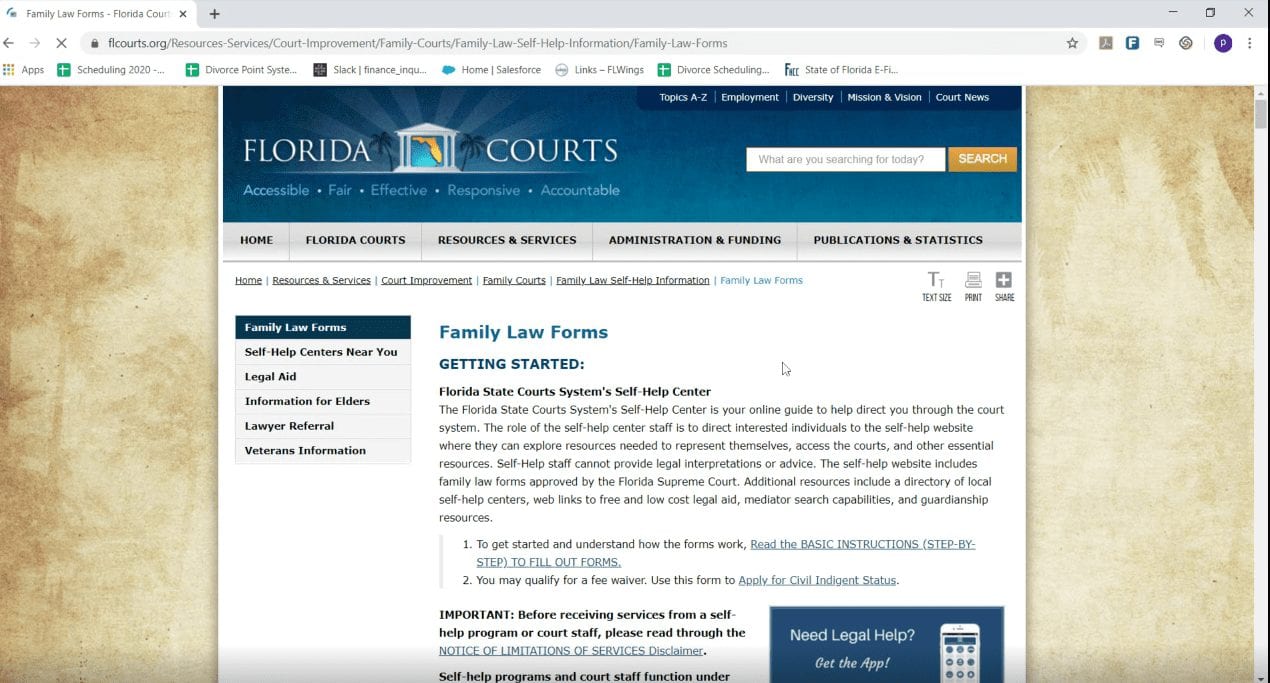 The First Steps To Take On The Florida Courts Website

Now, you’re going to go down to the drop-down menu right here. And there’s going to be dissolution of marriage and divorce will be in parentheses. You’re going to click that.

You’re going to go in and decide what kind of divorce petition to file. And there’s four options for you here. 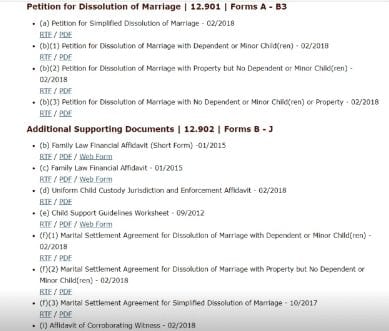 A simplified dissolution of marriage is a situation where you don’t have any children and you don’t really have any property to divide. Any small things that you might have already had to divide, you’ve already done. You’re going to go into that form and review it. It’s very easy, very straightforward. The two of you are going to sign it, and you should be able to get a hearing very quickly and get your divorce wrapped up.

Now, I’m going to go through and do a petition for dissolution of marriage with dependent or minor children because that’s the most involved one. So, when you’re ready to move forward and start filling this out, you go ahead and click the PDF option. 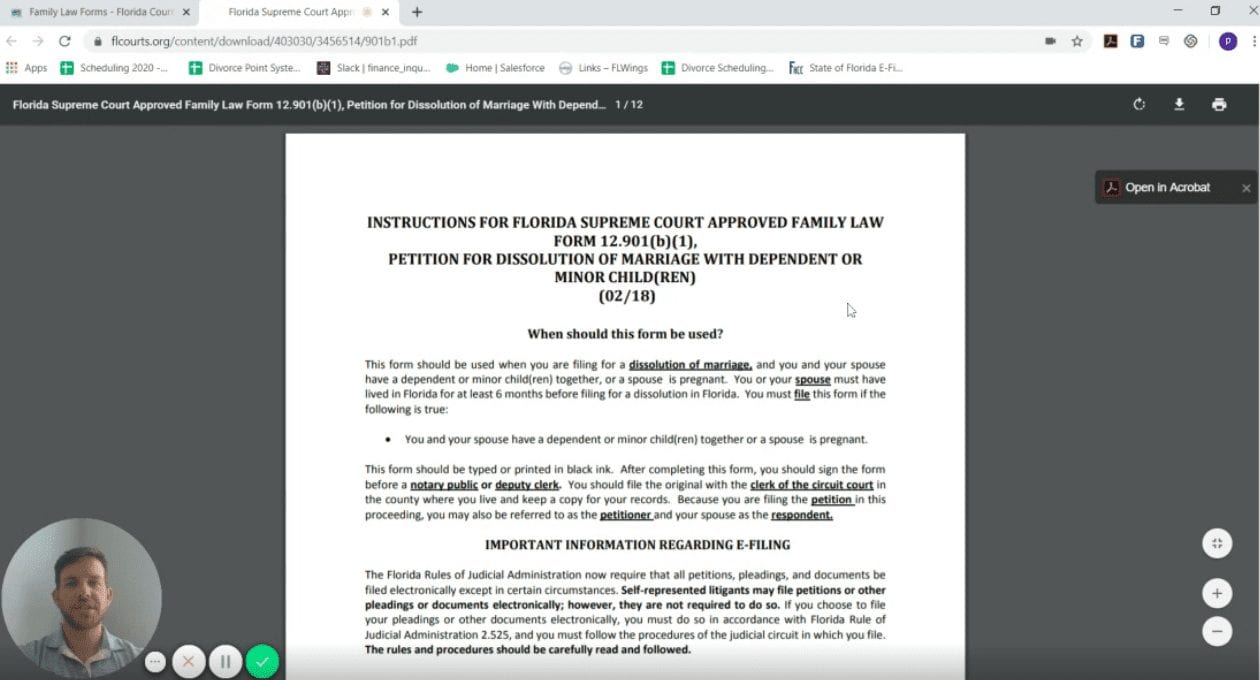 Now, as you get down a ways — this is page three at this point — it’s going to have a list here for you that I’ll highlight; these are the documents that you’ll need as you file your petition. 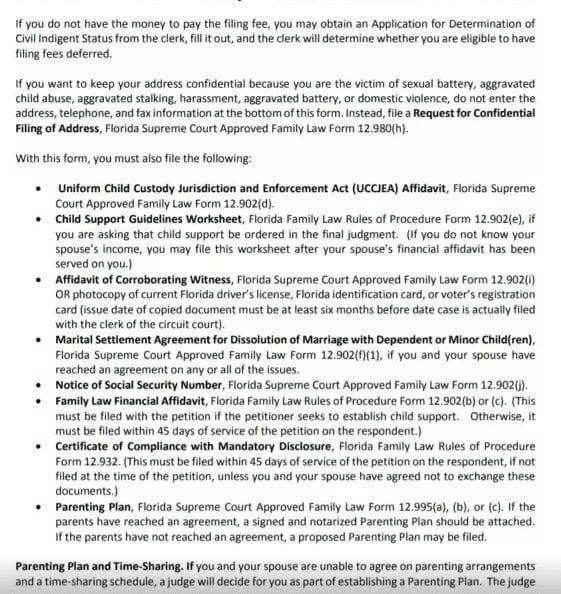 More About What Documents To File

Upfront, you’re going to have to file a Uniform Child Custody Jurisdiction and Enforcement Act affidavit. We call that the UCCJEA.

Also upfront, you’ll have to file a notice of Social Security number.

You’ll have to file a family law financial affidavit, a child support guidelines worksheet, a certificate of compliance with mandatory disclosure, and a parenting plan.

Now, it goes down and it discusses more of the issues that you need to be aware of when we’re talking about parenting plans, parental responsibility, and time-sharing. 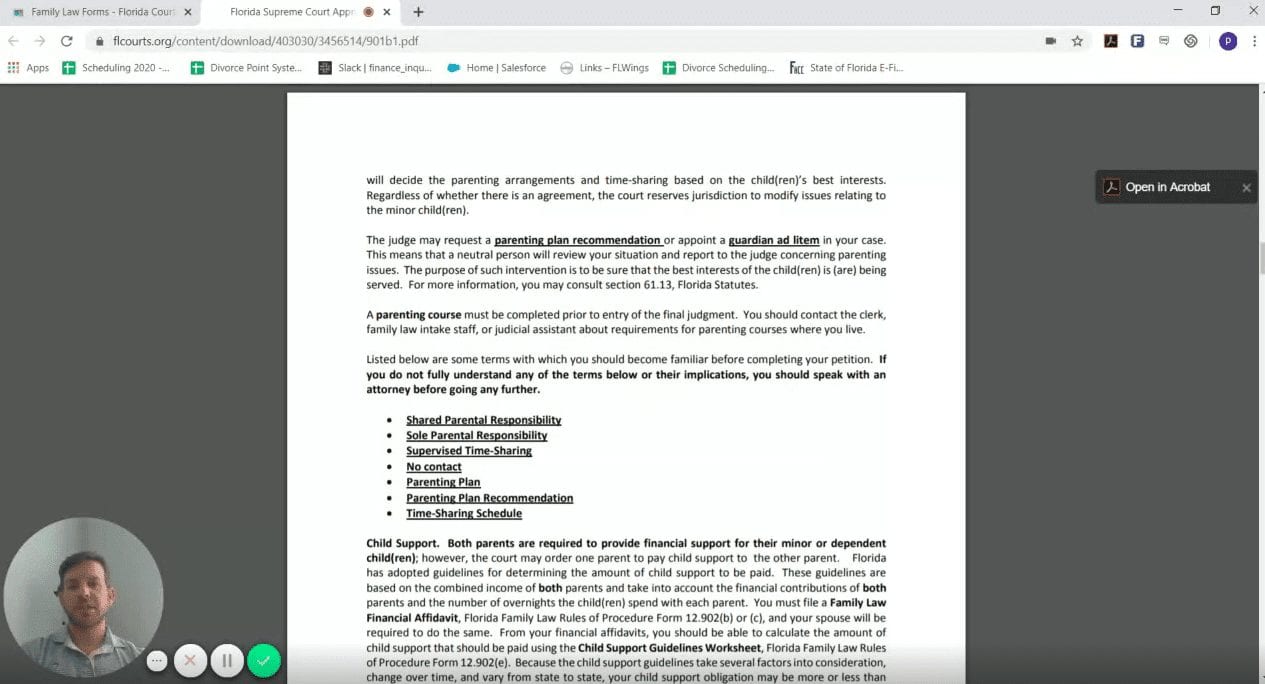 Finding Out What Judicial Circuit You’re In

Again, there’s a lot of very important information in here as you go about filling this information out on your own.

The first tricky question is that you probably don’t know what judicial circuit you’re in. Now, because we’re based in St. Petersburg, I’m going to go ahead and say we’re in the Sixth Circuit because we’re in Pinellas County.

Filling Out The Petition Itself

Then you’re going to go in and just start putting in the information. You’re the petitioner if you’re filling out this document. 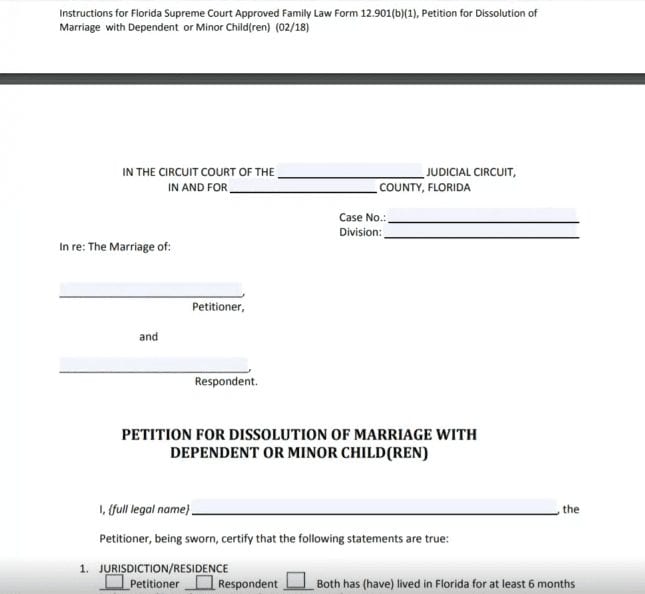 So, let’s say you’re a woman named Jane Doe and your husband is John Doe. You’re going to go ahead and plug that in. And you’re going to plug in your full legal name.

Usually, you’re going to highlight that both of you have been a resident of the state of Florida for at least six months — but if only one of you has, that’s fine. You have jurisdiction over the divorce itself.

Then you’re going to highlight whether one of you is a military member, both of you, or neither of you. All you have to do is click that and you’ll have the checkmarks.

Now, you’re going to go through and you’re going to put in what we call our marriage statistics — the month, day, and year you were married as well as the date you were separated. Here, estimating the date is totally fine. We do it all the time, because sometimes people have no idea the date they were actually separated. They know they got ticked off and left the house at some point in June of 2018. We can use that; we just indicate that it’s an approximate date.

Then you’re going to indicate the place of marriage.

About The Minor Children In A Divorce

Now, in Section Four, you’re going to go through and list whether you’re pregnant. Then, you’re also going to list any minor children you currently have.

If a child was born through an intact marriage, it’s assumed that the child is a child of the marriage. It just seems obvious, but there are occasions where they are “illegitimate” children. So, there’s going to need to be a disestablishment of paternity that needs to be done.

Now, you’re also going to click that you either are filing your financial affidavit upfront or you will be filing it. And it doesn’t have to be filed upfront. Under mandatory disclosure law, which is Florida Rules or Family Law Procedure 12.285, you have 45 days from the date the petition is served for both parties to file their Certificate of Compliance, their financial affidavit, and serve their mandatory disclosure list on the other party.

However, the Uniform Child Jurisdiction and Enforcement Act must be completed upfront. And the reason that must be completed upfront is that otherwise the court doesn’t know that it has jurisdiction over the minor children. So, you need to file it at the same time you file your petition for dissolution of marriage. You also need to file your Social Security affidavit at the same time.

Next, you’re going to pick your grounds for dissolution of marriage. Florida’s a no-fault state, so as long as one party’s sitting there saying, “I don’t think we’re going to be able to reconcile,” the court’s going to grant it. So, in most cases, you’re just going to click that option.

As far as marital assets — there are plenty of cases where there are no marital assets or liabilities, shorter-term marriages, or people just don’t have any money. Just go ahead and click that option.

Now, if there are marital assets, you’re going to either select that they’re going to be listed in the financial affidavit, which of course they need to be, and that you want them divided up pursuant to a written agreement between you and your spouse.

Or if that’s not an option and you don’t think that’s automatically going to happen, then you should always check the box that the court should determine how the assets and liabilities of this marriage are to be distributed.

Additionally, it gives you the option of making what’s called an unequal distribution claim saying that, “I’m the petitioner. My husband wasted a whole bunch of our funds on gambling, on booze, on other women. I should be entitled to a portion of his property because of this.” And then you’re going to go ahead and explain in there why you think that you legally have a chance.

Now, this is a tough concept because you’re not going to know how to claim that. And that’s a lot of the reason why people hire attorneys. Realistically, you should put together your financial affidavit upfront, review it, figure out what your needs on a monthly basis are, and what’s your deficit. And go ahead and make your best-case claim on your petition — because if you don’t ask for it upfront, you’re not going to be granted it at the end of the day.

Now, we’re going to get into the parenting plan. What do you want to do with your children? The minor children or child currently resides primarily with the petitioner, respondent, or other. You’re going to say where your children are laying their heads at night. 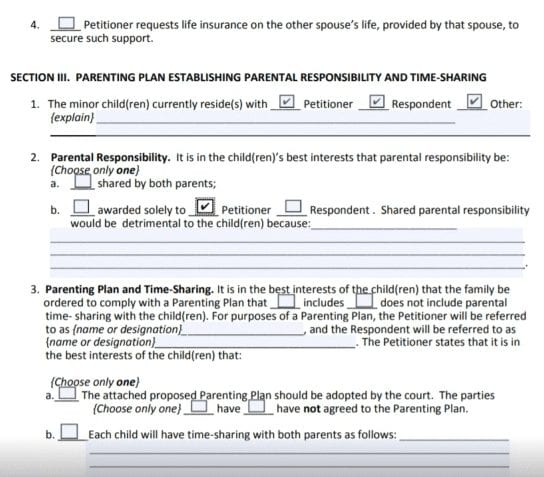 Now, you’re going to get into why you want the parenting plan that you want. And you’re just going to go through this whole provision. And again, it’s really laid out there easily for you in that like above we have choose all that apply in Section One, Paragraph Two. So, you can select all of these options.

Child support is next. And again, this is a choose all that apply provision. Go ahead and select that you’re requesting child support to be ordered. Select whether you’re filing the guidelines upfront or it will be filed at a later time.

Next, the date of separation and the date of filing this petition is important because you can go back up to two years to ask for retroactive child support. So, the court’s going to look at this and they’re going to say, “Okay, did the person ask for a retroactive award of child support?”

Again, it’s really important upfront to ask for what you may be asking for in the future.

Now, there are certain circumstances where child support may be legally ordered past the age of 18. It’s pretty rare, but there are children who have a mental or physical incapacity that began before 18, which is going to give the court the ability to grant child support beyond the normal age of 18. And you’re going to go ahead and put in why you think it’s appropriate and what the mental or physical incapacity is.

Next, we’ve got whether you’re asking for medical or dental insurance. Of course, you should ask for how you want the medical or dental expenses to be paid. Usually this is what the court is going to order according to the percentages of the child support guideline or what we call pro rata split, meaning there might be 60/40. One party makes 60% of the net income; the other party makes 40% of the net income. So, it’s divided up consistent with your net incomes.

Finally, we have “other.” This is where if either of the parties wants to go ahead and claim that they want to be restored to their former legal name. If you’re doing this with an attorney, you can ask for attorney’s fees in this provision.

Realistically, if you’re asking for alimony, you have some property, and you have children, you probably should be selecting every option in Section Six.

Then, you’re going to print this out, date it, and sign it in the presence of a notary. Next, take that with the other forms that you need to file upfront to the Clerk of Court. Now, pay your initiation fee, and they’re going to file the case for you.

If you have any questions, don’t hesitate to reach out to our law firm. Again, we’re Denmon Pearlman and we’re in St. Petersburg, Florida and we represent all of the Tampa Bay area. Our number is 813-554-3232.

What Our Clients Say

LINDA R.
13:50 21 Nov 19
Looking for quality, you found the right place! Emily Lowder, Para Legal and Paul Knudsen, council, were fabulous!! They went way above and beyond what you'd expect in a law firm. I went through quite a emotional divorce and they were there for me no matter what!!🙂 Awesome, caring, and excellent doing what's best for you!!